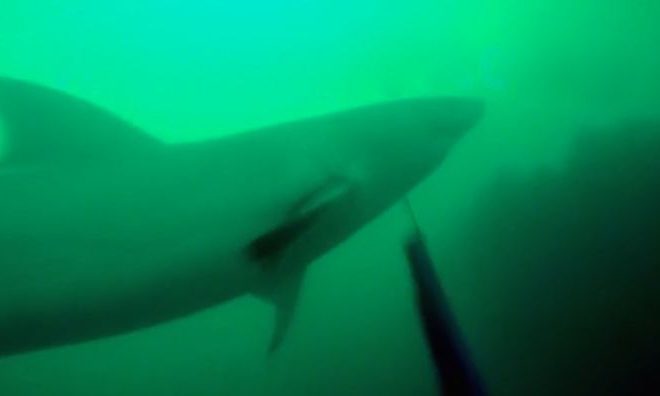 A spearfisherman became immediately terrified when a great white shark came to the surface and unexpectedly appeared by his side out of nowhere, prompting the diver to cry out loud.

Richard Leonard was diving off Arinston, Cape Town, South Africa, when the dangerous meeting happened at a depth of 62 feet with buddies.

“When I leveled out on the base, I peered to my right, and then the great white shark was right next to me as I looked to my left,” Leonard said. “That could fairly easily have been the ending of me.”

But the great white shark wasn’t done with him.

Richard described, “Before he turned his nose he was just an arm’s length away from my head. He appeared not to enjoy my defensive prod too much, sped away, made a sudden turn, dropped his pectoral fins (quite competitive behaviour), made a sudden 180-degree turn and came right for me.

At this stage the scenario turned to life from a close encounter. The shark was certainly now in assault style. I had to reveal him some dominance to prevent being bitten. I managed to give him a great prod inducing him to veer off again and throw my spear gun forwards with all my might, and [ it ] vanished into the dark water. Now I made my rise as quickly as I could and was out of atmosphere, attempting not to show any signals of panic.”

Luckily, he was out of the water seconds after. Rene Nel, the boat driver, rushed around to pick up another diver and Leonard.