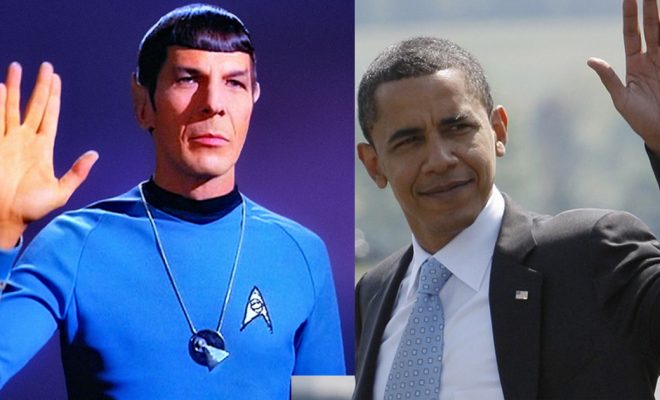 Matthew Continetti, editor-in-chief of the right-wing misinformation station known as the Washington Free Beacon, hates Spock. Continetti confesses he is a Star Trek fan, but that he was somewhat confused by his rather apathetic reaction to the death of beloved actor Leonard Nimoy.

Though conservatives initially praised the actor and even attempted to erroneously claim Nimoy for themselves that love affair apparently ended when President Obama once again proved that, if he spoke out against slitting ones throat with a rusty butter knife, hospitals would see an influx of incredibly stupid patients that night (hint, hint, Mr. President).

I loved Spock, President Obama said in a touching statement following the passing of the actor. And that was all it took.

While the President did nothing but beam praise at the departed Nimoy, noting that his character was Cool, logical, big-eared, and level headed, the center of Star Treks optimistic, inclusive vision of humanitys future, Continetti somehow viewed the Presidents words as a comparison to himself. Just like you know whom, he wrote of the Presidents statement.

The president is not the only writer who has drawn comparisons between himself and Spock, Continetti wrote, though its obvious President Obama drew no such comparison.

I am also a Star Trek fan, but I admit I was somewhat confused by my rather apathetic reaction to Nimoys death. And as I thought more about the presidents statement, I realized he identifies with the very aspects of the Spock character that most annoy me. I dont love Spock at all.

Oh, and he has reasons, alright! As usual, evil happens because Spock is too idealistic, too in thrall to a value-neutral conception of science, to consider the unintended consequences of his actions, Continetti says as he struggles to mold Obama subtly into his criticisms of a flawed and fictional character:

Not only do Spocks peacenik inclinations routinely land the Enterprise and the Federation into trouble, his logic and level head mask an arrogant emotional basket case. Unlike the superhuman android Data, a loyal officer whose deepest longing is to be human, Spock spends most of his life as a freelancing diplomat eager to negotiate with the worst enemies of Starfleet. Hes the opposite of a role model: a cautionary tale.

Spock cares only for himself. He returns to the Enterprise in Star Trek: The Motion Picture (1979) only because he believes the superior intelligence of Vger might help him finally purge all human elements from his soul. True, he sacrifices himself for the good of the ship in Star Trek: The Wrath of Khan (1982), but Spocks renunciation of self is not as total as we are led to believe. He knows he has a fallback position. He knocks out McCoy andwithout the doctors consenttransfers part of his consciousness to his old friend.

After a more than ten additional paragraphs of complaining about Spocks (and, presumably Obamas) faults through The Next Generation, he refers to the new film franchise as an enjoyable picture that is revealing of Spocks awfulness.

It shows how Spock is tormented, physically and mentally, by the fact that his mother is human, how Mr. Logic is actually a boiling kettle of fury, resentment, passion, and ambition, Continetti writes. Spock is a jerk to his girlfriend Uhura, who is way out of his league. He almost kills Kirk. He is so overcome with emotion he relieves himself from duty in the middle of a huge crisis. Spock is rude to his father.

And Obama likes this selfish jerk? Continetti asks. The coolness the president so appreciates in Spock is a thin veneer over a remarkably arrogant and off-putting detachment from human suffering.

He notes that Spock is moody, flip, detached, and self-consciously superior. Data wants to fit in, while Spock displaces his anxieties over his bicultural heritage onto his family and work relationships. You know, just like Obama.

What Leonard Nimoys death revealed is that there is a sizable portion of Trek fans, and of nerds in general, that identifies with Spocks neuroses, his hang-ups, his self-loathing, that are attracted to the cold soulless abstractions through which he views life, who believe in the naive and ineffective diplomacy in which he so thoughtlessly and recklessly and harmfully engages. I cant help but find this revelation disturbing, Continetti concludes. It will take America some time to recover from the legacy of our Spock-loving president.

On the Beacons Facebook page, some agreed with Continetti:

The debate rages on, but one thing is for certain: Leonard Nimoy must be rolling over in his grave (with laughter) at this doltish and, shall we say, highly illogical debate. It is always impressive how quickly conservatives denounce something the moment the President speaks in favor of it.

Perhaps Obama needs to encourage people to breathe oxygen, or eat food not just eat healthy, but consume digestible materials. Would our friends on the Right suffocate? Starve?

Featured image by Valerie Beaumont for If You Only News